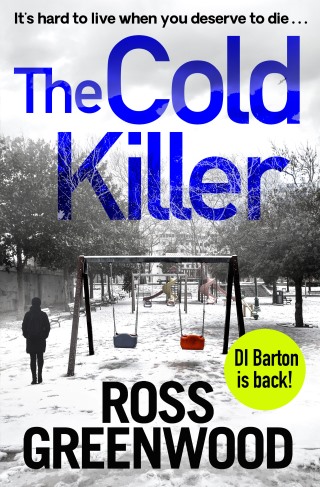 It's hard to live when you think you deserve to die…

When a tired old inmate is found dead in his cell, the prison is obligated to investigate and so DI Barton attends. The men he interviews have been convicted of some of the worst things a human being can do, but it appears likely that the death was due to natural causes.

When the house of the dead man is burgled and that crime is followed by a suspicious fire, Barton desperately needs to speak to his widow, but she’s nowhere to be found.

In the space of twenty-four hours, everyone he wants to talk to has vanished. Then he receives some post which makes him believe he could be the next to disappear.

Barton’s investigation goes full circle, through a series of brutal murders, back to the prison, and all signs are pointing to the fact that he’s made a terrible mistake.

There’s a violent killer on the loose, who wants everyone to learn that some people deserve to die.

DI Barton is back as Ross Greenwood continues with his bestselling series, perfect for fans of Mark Billingham and Ian Rankin.

'Move over Rebus and Morse; a new entry has joined the list of great crime investigators in the form of Detective Inspector John Barton. A rich cast of characters and an explosive plot kept me turning the pages until the final dramatic twist.' author Richard Burke

‘Master of the psychological thriller genre Ross Greenwood once again proves his talent for creating engrossing and gritty novels that draw you right in and won’t let go until you’ve reached the shocking ending.’ Caroline Vincent at Bitsaboutbooks blog

'Ross Greenwood doesn’t write clichés. What he has written here is a fast-paced, action-filled puzzle with believable characters that's spiced with a lot of humour.' author Kath Middleton

Ross Greenwood: Ross Greenwood is the bestselling author of ten crime thrillers. Before becoming a full-time writer he was most recently a prison oﬃcer and so worked everyday with murderers, rapists and thieves for four years. He lives in Peterborough.