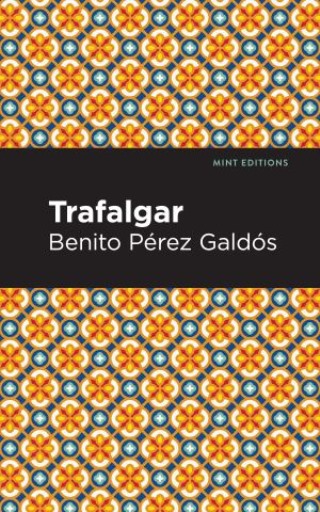 Trafalgar (1873) is a novel by Benito Pérez Galdós. Published toward the beginning of Pérez Galdós’ career, Trafalgar is the first in of 46 historical novels in the author’s monumental, career spanning series of National Episodes. Set during the bloody naval battle of Trafalgar in 1805, Pérez Galdós’ novel is a story of heroism, growth, and adventure that manages to find humanity in history. “Always eager to mimic the greater world around us, we boys too had our squadrons of little ships, roughly hewn in wood, with sails of paper or of rag, which we navigated with the greatest deliberation and gravity in the pools of Puntales or La Caleta.” At fourteen, the young orphan Gabriel de Araceli gets the chance to leave boyhood games behind when his master, a retired naval officer, receives a letter requesting his return to service. Together, Gabriel and Don Alonso set out to join a Spanish Armada preparing to enter into battle with the British Royal Navy. Painstakingly researched by its author, Trafalgar is a detailed fictional retelling of one history’s most iconic conflicts. With a beautifully designed cover and professionally typeset manuscript, this edition of Benito Pérez Galdós’s Trafalgar is a classic of Spanish literature reimagined for modern readers.

Benito Pérez Galdós (1843-1920) was a Spanish novelist. Born in Las Palmas de Gran Canaria, he was the youngest of ten sons born to Lieutenant Colonel Don Sebastián Pérez and Doña Dolores Galdós. Educated at San Agustin school, he travelled to Madrid to study Law but failed to complete his studies. In 1865, Pérez Galdós began publishing articles on politics and the arts in La Nación. His literary career began in earnest with his 1868 Spanish translation of Charles Dickens’ Pickwick Papers. Inspired by the leading realist writers of his time, especially Balzac, Pérez Galdós published his first novel, La Fontana de Oro (1870). Over the next several decades, he would write dozens of literary works, totaling 31 fictional novels, 46 historical novels known as the National Episodes, 23 plays, and 20 volumes of shorter fiction and journalism. Nominated for the Nobel Prize in Literature five times without winning, Pérez Galdós is considered the preeminent author of nineteenth century Spain and the nation’s second greatest novelist after Miguel de Cervantes. Doña Perfecta (1876), one of his finest works, has been adapted for film and television several times.