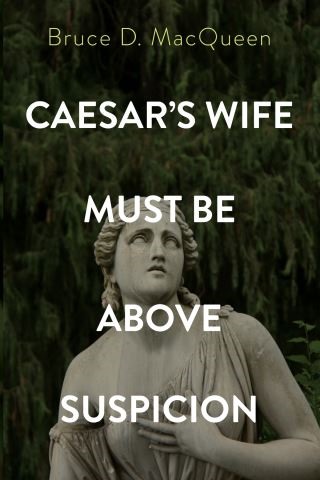 Caesar’s Wife Must Be Above Suspicion

This is a work of alternate history: that is, it explores what might have happened if Julius Caesar had not died at hands of assassins on the Ides of March, 44 BCE. Five of the would-be assassins (including Brutus and Cassius) are put on trial for treason. Although none of the defendants denies participating in the attempted assassination, a startling intervention by Caesar himself, late in the trial, leads to their acquittal. They are immediately attacked and killed, however, by an angry mob. The story is told from multiple points of view, including especially Caesar's wife, Calpurnia, who turns out to be much more deeply involved in the events of March 15 and the aftermath than her husband had ever supposed. All of the characters in this novel are actual historical persons, except for one: a British Gaul named Skaiva, who becomes entangled in the life of the man who conquered his country.

Bruce D. MacQueen: Bruce D. MacQueen is Associate Professor of Classics and Comparative Literature at the University of Tulsa. In addition to Caesar’s Wife Must Be Above Suspicion, he has written two academic books, edited several others, and written numerous articles and papers, not only in classics, but also in neurolinguistics.