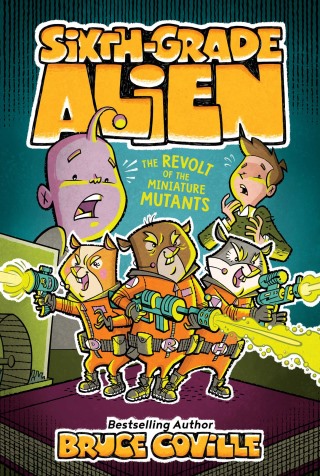 The Revolt of the Miniature Mutants

Pleskit and Tim face off against the class pets in this tenth book in the hilarious, fast-paced, and accessible sci-fi series Sixth-Grade Alien from the bestselling author of Aliens Ate My Homework, Bruce Coville.

When the hamsters in Ms. Weintraub’s room start acting strangely, everyone thinks the problem must be the alien vitamins that Pleskit has been feeding them. But even after Pleskit stops the vitamin treatments, the hamsters continue to grow bigger and stronger and crankier.

Clearly, something else is at work. To find out what, Tim and Pleskit must solve a mystery, track down an enemy, and defend themselves against a trio of the most dangerous hamsters the world has ever seen!

Bruce Coville: Bruce Coville has published more than one hundred books, which have sold more than sixteen million copies. Among his most popular titles are My Teacher Is an Alien, Into the Land of the Unicorns, and The Monster’s Ring. Bruce also founded Full Cast Audio, a company that creates recordings of the best in children’s and young adult literature. He lives in Syracuse, New York, with his wife, Katherine. Visit him at BruceCoville.com.