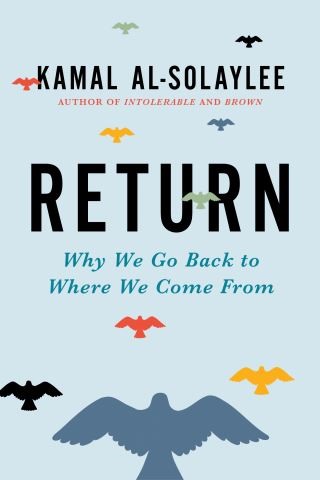 Why We Go Back to Where We Come From

Drawing on extensive reporting from around the world and astute political analysis, Return: Why We Go Back to Where We Come From illuminates a personal quest. Kamal Al-Solaylee, author of the bestselling and award-winning Intolerable: A Memoir of Extremes and Brown: What Being Brown in the World Today Means (for Everyone), yearns to return to his homeland of Yemen, now wracked by war, starvation and daily violence, to reconnect with his family. Yemen, as well as Egypt, another childhood home, call to him, even though he ran away from them in his youth and found peace and prosperity on the calm shores of Toronto.

In Return, Al-Solaylee interviews dozens of people who have chosen to or long to return to their homelands, from the Basques to the Irish to the Taiwanese. The author does make a return of sorts himself, to the Middle East, visiting Israel and the West Bank as well as Egypt to meet up with his sisters. His Arabic stilted and his mannerisms foreign, Al-Solaylee finds that the English language and Western customs are now his only cultural currency.

Return is a chronicle of love and loss, of global reach and personal desires. It sets the narrative of going home against geopolitical forces that are likely to shape the rest of this century and beyond. It’s a book for anyone who has ever wondered what it would be like to return to their roots.

KAMAL AL-SOLAYLEE is the author of the nationally bestselling memoir Intolerable: A Memoir of Extremes, which won the 2013 Toronto Book Award and was a finalist for the CBC’s Canada Reads, as well as the Hilary Weston Writers’ Trust Prize for Nonfiction. His second book, Brown: What Being Brown in the World Today Means (to Everyone), was hailed as “brilliant” by the Walrus magazine and “essential reading” by the Globe and Mail. A finalist for the Governor General’s Literary Award for Nonfiction as well as the Trillium Book Award, Brown won the Shaughnessy Cohen Prize for Political Writing. A two-time finalist for the National Magazine Awards, Al-Solaylee won a gold medal for his column in Sharp in 2019. He holds a Ph.D. in English and is Director of the School of Journalism, Writing, and Media at the University of British Columbia.