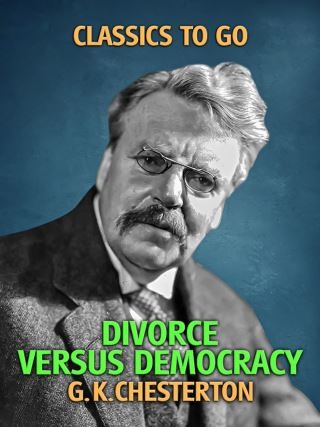 Excerpt: "I have been asked to put forward in pamphlet form this rather hasty essay as it appeared in “Nash’s Magazine”; and I do so by the kind permission of the editor. The rather chaotic quality of its journalism it is now impossible to alter. The convictions upon which it is based are unaltered and unalterable. Indeed, in so far as circumstances have since affected them, they are greatly strengthened. In so far as there was something sporadic and seemingly irrelevant in the writing, it was partly because I was contending against an evil that was diffused and indefinable, at once tentative and ubiquitous. Since then that disease has come to a head and burst; primarily in the North of Europe."

G. K. Chesterton: Gilbert Keith Chesterton KC*SG (29 May 1874 – 14 June 1936) was an English writer, philosopher, lay theologian, and literary and art critic. He has been referred to as the "prince of paradox". Time magazine observed of his writing style: "Whenever possible Chesterton made his points with popular sayings, proverbs, allegories—first carefully turning them inside out." Chesterton created the fictional priest-detective Father Brown, and wrote on apologetics. Even some of those who disagree with him have recognised the wide appeal of such works as Orthodoxy and The Everlasting Man. Chesterton routinely referred to himself as an "orthodox" Christian, and came to identify this position more and more with Catholicism, eventually converting to Catholicism from High Church Anglicanism. Biographers have identified him as a successor to such Victorian authors as Matthew Arnold, Thomas Carlyle, John Henry Newman, and John Ruskin.