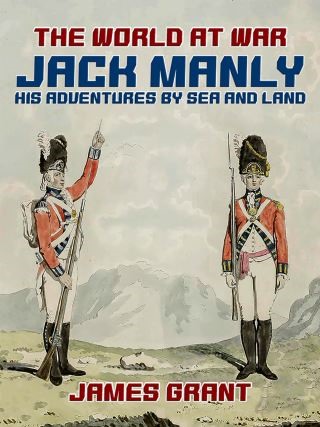 Jack Manly, His Adventures by Sea and Land

Excerpt: "It was the evening of the sixteenth of March. Exactly six months had elapsed since I left my father's snug villa at Peckham, with its walls shrouded by roses and honeysuckle; and now I found myself two thousand three hundred miles distant from it, in his agent's counting-room, in the dreary little town of St. John, in Newfoundland, writing in a huge ledger, and blowing my fingers from time to time, for snow more than ten feet deep covered all the desolate country, and the shipping in the harbour was imbedded in ice at least three feet in thickness; while the thermometer, at which I glanced pretty often, informed me that the mercury had sunk twelve degrees below the freezing point. While busily engrossing quintals of salted fish, by the thousand, barrels of Hamburg meal and Irish pork, chests of bohea, bales of shingles, kegs of gunpowder, caplin nets, anchors and cables, and Indian corn from the United States, with all the heterogeneous mass of everything which usually fill the stores of a wealthy merchant in that terra nova, I thought of the noisy world of London, from which I had been banished, or, as tutors and guardians phrased it, "sent to learn something of my father's business—i.e., practically to begin life as he had begun it;" and so I sighed impatiently over my monotonous task, while melting the congealed ink, from time to time, on the birchwood fire, and reverting to what March is in England, where we may watch the bursting of the new buds and early flowers; where the birds are heard in every sprouting hedge and tree, and as we inhale the fresh breeze of the morning, a new and unknown delight makes our pulses quicken and a glow of tenderness fill the heart—for then we see and feel, as some one says, "what we have seen and felt only in childhood and spring.""

James Grant: James Grant (1822–1887) was a Scottish novelist and miscellaneous writer. Grant was born in Edinburgh, Scotland, and was a distant relation of Sir Walter Scott. He was a prolific author, writing some 90 books, including many yellow-backs. Titles included Adventures of an Aide-de-camp, One of "The six hundred", The Scottish musketeers and The Scottish cavalier.