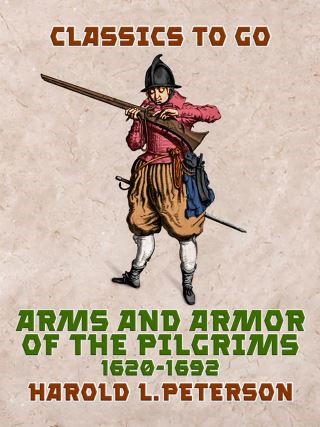 Excerpt: “The average colonist landing on the wild shores of North America in the early 1600’s set great store by his arms and armor. The Pilgrims were no exception. They were strangers in a vast and largely unknown land, inhabited by wild beasts and peopled by savages who were frequently hostile. Greatly outnumbered by known enemies and possibly facing dangers of which they were not yet aware, these Englishmen placed their main hope for survival on the possession of superior weapons and protective armor. On the more peaceful side, their firearms were also valuable, for they provided fresh meat for the table and furs for sale back home. Because the colonist was so dependent on his arms he soon learned to select the most efficient kinds that he could obtain. In so doing he pushed the evolution of military materiel far ahead of contemporary Europe and developed a high degree of skill, particularly in the use of firearms. The military supplies which the Pilgrims brought with them may be divided into three major categories: defensive armor, edged weapons, and projectile weapons. A completely armed man, especially in the first years, was usually equipped with one or more articles from each of the three groups, usually a helmet and corselet, a sword, and a musket."

Harold L. Peterson: Harold Leslie Peterson, born May 22,1922, died January 1, 1978 was a historian widely considered in his day to be a foremost expert on firearms and related subjects in American history.