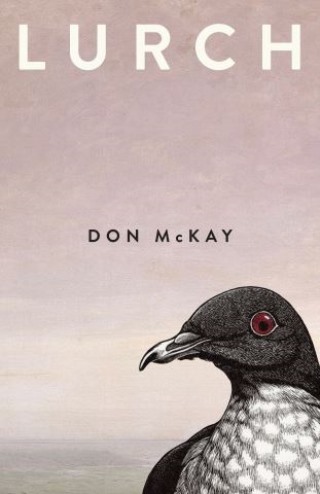 "[McKay's] exuberantly musical and shrewd poems are ecological in the fullest sense of the word: they seek to elucidate our relationships with our fragile dwelling places both on the earth and in our own skins." --New York Times Book Review

Old joke: “What’s the difference between a lurch and a dance step?”

These poems are what happens when you stay out on the dance floor instead, dancing the staggers. The full moon rises from the ocean and you lurch with astonishment that we live on a rocky sphere whirling in space. Or the bird in your hand—a pipit or a storm petrel—conveys the exquisite frailty of existence. And there’s the complex of lurches as we contemplate our complicity in the sixth mass extinction.

Throughout Lurch, language dances its ardent incompetence as a translator of “the profane wonders of the wilderness,” whether manifest as Balsam Fir, Catbirds, the extinct Eskimo Curlew, or the ever-present Cosmic Microwave Background.

What is the difference between a love song and an elegy?

We live between eroding raindrops

and accelerating clocks. The piano

lifts its lid to show its wire-and-hammer

Don McKay: Don McKay is the multi-award-winning author of thirteen previous books of poetry, including Paradoxides; Strike/Slip, winner of the Griffin Poetry Prize; and Camber: Selected Poems, a finalist for the Griffin Poetry Prize and a Globe and Mail Notable Book of the Year. Angular Unconformity, a collected poems, appeared from Goose Lane in 2014. McKay has taught poetry in universities across the country. He presently lives in St. John’s, Newfoundland.