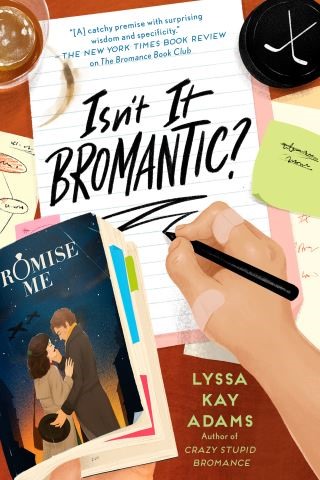 With his passion for romance novels, it was only a matter of time before Vlad wrote one.

Elena Konnikova has lived her entire adult life in the shadows. As the daughter of a Russian journalist who mysteriously disappeared, she escaped danger the only way she knew how: She married her childhood friend, Vladimir, and moved to the United States, where he is a professional hockey player in Nashville.

Vlad, aka the Russian, thought he could be content with his marriage of convenience. But it’s become too difficult to continue in a one-sided relationship. He joined the Bromance Book Club to learn how to make his wife love him, but all he’s learned is that he deserves more. He’s ready to create his own sweeping romance—both on and off the page.

The bros are unwilling to let Vlad forgo true love—and this time they’re not operating solo. They join forces with Vlad’s neighbors, a group of meddling widows who call themselves the Loners. But just when things finally look promising, Elena’s past life intrudes and their happily ever after is cast into doubt.

Lyssa Kay Adams: After a nearly twenty-year career as a journalist, Lyssa Kay Adams's dreams of writing and publishing her own HEAs came true in 2015 with the release of her first novel. Today, she writes full-time from her home in Michigan with a pesky, fluffy K9 assistant named Domino who spends most of his day snoring on her desk (that is, when he's not burying things around the house).