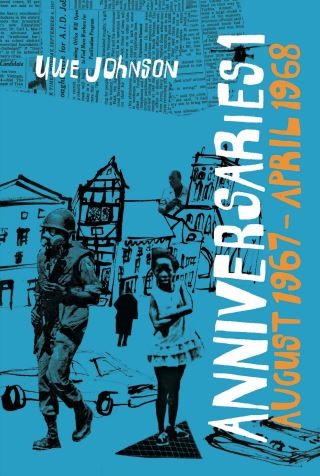 The first volume of a titanic masterpiece of twentieth-century literature, named one of the best books of 2018 by The New York Times critics.

Published to great acclaim as a two-part boxed set in 2018, Anniversaries is now available as two individual volumes. It is August 1967, and Gesine Cresspahl, born in Germany the year that Hitler came to power, a survivor of war, of Soviet occupation, and of East German Communism, has been living with her ten-year-old daughter, Marie, in New York City for six years. Mother and daughter find themselves caught up in the countless stories of the world around them: stories of work and school and their neighborhood, with its shifting and varied cast of characters, as well as the stories that Gesine reads in The New York Times every day—about Che Guevara, racial violence, the war in Vietnam, and the US elections to come. Now, with Marie growing up, Gesine has decided to tell her daughter the story of her own childhood in a small north German town in the 1930s and ’40s. Amid memories of Germany’s criminal and disastrous past and the daily barrage of news from a world in disarray, Gesine, conscientious, self-scrutinizing, with a sharp sense of humor, struggles to describe what she has learned over the years and what she hopes to pass on to Marie. Marie, articulate, quizzical, with a perspective that is very much her own, has plenty of questions, too.

Uwe Johnson’s intimate portrait of a mother and daughter is also a panorama of past and present history and the world at large. Comparable in richness of invention and depth of feeling to Joyce’s Ulysses and Proust’s In Search of Lost Time, Anniversaries is one of the world’s great novels.

Uwe Johnson: Uwe Johnson (1934–1984) grew up in the small town of Anklam, Germany. He lived in New York City from 1966 until 1968 with his wife and daughter. It was during that time that he began work on Anniversaries. He died in Sheerness-on-Sea, UK, shortly after Anniversaries was published, at age forty-nine.

Damion Searls is the author of The Philosophy of Translation. He has translated some forty books, including, for NYRB Classics, works by Patrick Modiano, Alfred Döblin, Nescio, and Robert Walser.