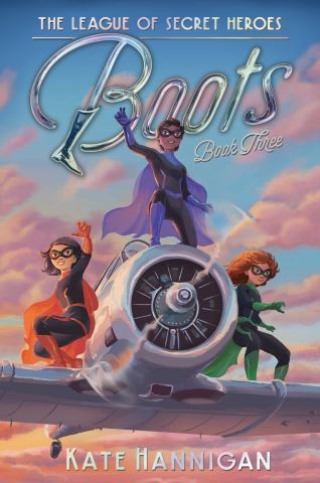 The League of Secret Heroes travel to Paris on their most critical mission yet in this third book in the action-packed, comics-inspired adventure series that’s Hidden Figures meets Wonder Woman!

When the Infinity Trinity hears of a Nazi spy plot that could bring danger to Chicago, Mae knows they must go to check on her beloved aunts, the daring World War II pilots Willa Brown and Janet Harmon.

Mae’s Granny Crumpler isn’t exactly thrilled about her granddaughter and her friends trying to get involved with something so dangerous—especially when she’s already worried about not hearing from Mae’s dad, who is serving in Europe and fighting for freedom on and off the battlefield.

But when Aunt Willa and Aunt Janet go missing, Mae knows that the sinister spy plot just got personal. They discover the evil Metallic Falcon has captured her aunts, and he is determined to thwart the Infinity Trinity’s ultimate quest to bring back Zenobia and all the missing superheroes safely.

With the help of the Women Airforce Service Pilots (WASPs) and Room Twelve, Mae, Josie, and Akiko must use all their powers and code-cracking smarts in a challenge that will take them on a high-flying loop from Chicago to Sweetwater, Texas, to a final showdown in Paris. Can the Infinity Trinity soar to new heights and complete the biggest mission of them all?

Kate Hannigan: Kate Hannigan is a noted author with a special passion for stories that empower girls and women. Her picture book biography, A Lady Has the Floor, received four starred reviews and was named a Junior Library Guild Selection. In addition to the 2016 Golden Kite Award for Middle Grade Fiction, The Detective’s Assistant also received two starred reviews and was a Booklist Editor’s Choice, among many other accolades. Hannigan presented at NCTE on “Our Mighty Girls,” about girl power in middle grade fiction, and was a judge for 2018’s Golden Kite Awards. Between her active presence on social media (@KateChicago), her work as founder of the Hyde Park/South Side Chicago chapter of SCBWI, and as a busy conference speaker, Kate is an involved, vocal, and respected member of the kid lit community. Visit her online at KateHannigan.com.