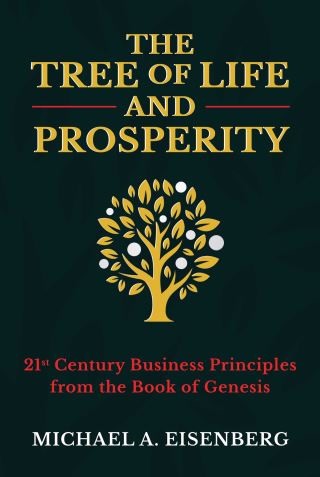 The Tree of Life and Prosperity

21st Century Business Principles from the Book of Genesis

One of Israel’s most successful venture capitalists uses the words and actions of the Hebrew patriarchs to lay the foundations for a modern growth economy based on timeless business principles and values.

Entrepreneurs, businessmen, and investors are constantly looking for principles and rules that will pave the way for success. Usually, those at the forefront are successful entrepreneurs from Silicon Valley or legendary Wall Street investors. But the principles of economic growth, wealth creation and preservation were written long before the rise of the modern market economy and its heroes.

Michael Eisenberg—one of the most successful venture capitalists in Israel, and one of the first investors in Lemonade, and Wix—reveals in The Tree of Life and Prosperity the eternal principles for successful business, economics, and negotiation hidden in the Torah—and shows their relevance to the modern world we live in.

Michael A. Eisenberg: Michael Eisenberg is co-founder and General Partner at Aleph, an early stage venture capital fund with over $500 million under management. Michael has been a venture capitalist for twenty-five years. Aleph focuses on partnering with great Israeli entrepreneurs to build large, meaningful companies and impactful global brands. Since its founding in 2013, Aleph has invested in more than forty companies, including Melio, Lemonade, Bringg, JoyTunes, Healthy.io, and Nexar.

Since 2006, Michael has been writing the blog Six Kids and a Full Time Job, on topics ranging from politics to technology, Judaism, and macroeconomics. He was a contributor to TheMarker, a Hebrew-language daily business newspaper, and is the author of the “The Hummus Manifesto,” the seminal piece on Israel’s innovation scene. Michael has also published five books in Hebrew: The Vanishing Jew, Ben Baruch, The Tree of Life and Prosperity, Everyone can be Moses, and Roaring Tribe. He lectures frequently on venture capital, Israel, and entrepreneurship. He serves on the board of the nonprofit organization Yeshivat Har Etzion and is the chairman of The Shomer Hachadash. Michael lives in Jerusalem with his wife and eight children.