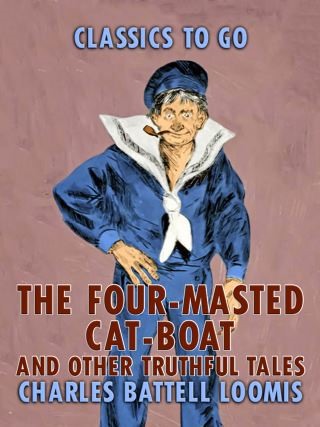 The Four-Masted Cat Boat, and Other Truthful Tales

Excerpt: "The sea lay low in the offing, and as far as the eye could reach, immense white-caps rode upon it as quietly as pond-lilies on the bosom of a lake. Fleecy clouds dotted the sky, and far off toward the horizon a full-rigged four-masted cat-boat lugged and luffed in the calm evening breezes. Her sails were piped to larboard, starboard, and port; and as she rolled steadily along in the heavy wash and undertow, her companion-light, already kindled, shed a delicate ray across the bay to where the dull red disk of the sun was dipping its colors. Her cordage lay astern, in the neat coils that seamen know so well how to make. The anchor had been weighed this half-hour, and the figures put down in the log; for Captain Bliffton was not a man to put off doing anything that lay in the day’s watch. Away to eastward, two tiny black clouds stole along as if they were diffident strangers in the sky, and were anxious to be gone. Now and again came the report of some sunset gun from the forts that lined the coast, and sea-robins flew with harsh cries athwart the sloop of fishing-boats that were beating to windward with gaffed topsails. “Davy Jones’ll have a busy day to-morrow,” growled Tom Bowsline, the first boatswain’s mate. “Meaning them clouds is windy?” answered the steward, with a glance to leeward.""

Charles Battell Loomis: Loomis was born in Brooklyn, New York, and educated at the Polytechnic Institute there. He was in business from 1879 to 1891, but he gave it up to devote himself to the writing of magazine sketches and books much appreciated for their humor.