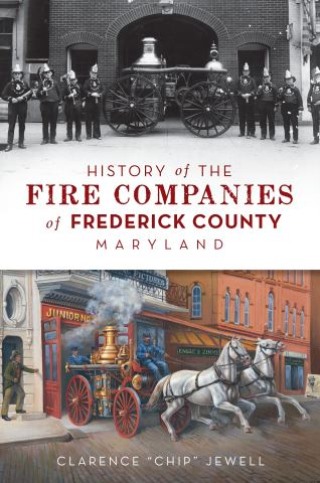 History of the Fire Companies of Frederick County, Maryland

Organized fire protection in Frederick County, Maryland, existed before the adoption of the Constitution. Follow the colorful history of the fire companies from the first fire engine in 1764 to the fire company militia units that were summoned to Harper's Ferry and fire halls used during the Civil War. Learn how the fire companies in Frederick County had statewide influence by organizing the Maryland State Firemen's Association in 1893. Read of the tradition of fire engines "throwing water over the town clock"--sometimes to test performance, other times just for bragging rights. Local author and volunteer firefighter Chip Jewell provides a snapshot of how each fire company was organized from the early 1800s to the most recent companies in the 1970s.

Clarence "Chip" Jewell: Deputy Chief Clarence "Chip" Jewell retired in 2017 as director of the Frederick County Division of Volunteer Fire & Rescue Services, serves as president and assistant chief of the Libertytown Volunteer Fire Department and is also a life member of the Junior Fire Company No. 2 in Frederick. He is a coauthor of Firefighting in Frederick and author of Firefighting in Frederick County, both from Arcadia Publishing. He is president and a founder of the Frederick County Fire & Rescue Museum & Preservation Society Inc. and a founding member of the National Fire Heritage Center.