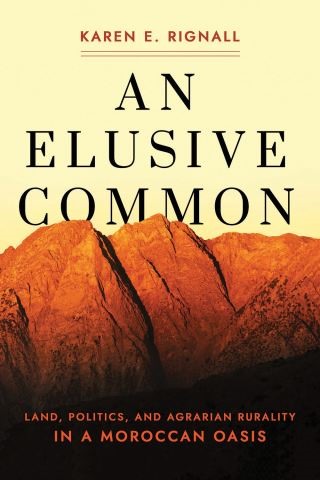 Land, Politics, and Agrarian Rurality in a Moroccan Oasis

An Elusive Common details the fraught dynamics of rural life in the arid periphery of southeastern Morocco. Karen Rignall considers whether agrarian livelihoods can survive in the context of globalized capitalism and proposes a new way of thinking about agrarian practice, politics, and land in North Africa and the Middle East. Her book questions many of the assumptions underlying movements for land and food sovereignty, theories of the commons, and environmental governance.

Global market forces, government disinvestment, political marginalization, and climate change are putting unprecedented pressures on contemporary rural life. At the same time, rural peoples are defying their exclusion by forging new economic and political possibilities. In southern Morocco, the vibrancy of rural life was sustained by creative and often contested efforts to sustain communal governance, especially of land, as a basis for agrarian livelihoods and a changing wage labor economy.

An Elusive Common follows these diverse strategies ethnographically to show how land became a site for conflicts over community, political authority, and social hierarchy. Rignall makes the provocative argument that land enclosures can be an essential part of communal governance and the fight for autonomy against intrusive state power and historical inequalities.

Karen E. Rignall is a Community and Leadership Development Professor at the University of Kentucky. Her research has appeared in numerous journals, including, The Journal of Peasant Studies, and Migration and Development.