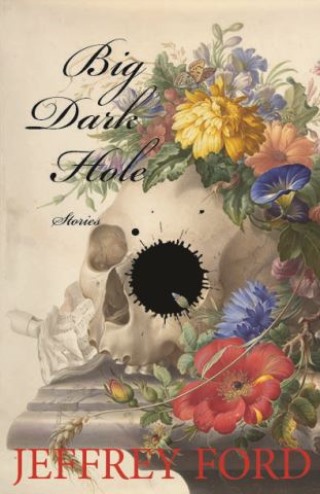 A Jeffrey Ford story may start out in the innocuous and routine world of college teaching or evenings on a porch with your wife. But inevitably the weird comes crashing in. Maybe it’s an unexpected light in a dark and uninhabited house, maybe it’s a drainage tunnel that some poor kid is suddenly compelled to explore. Maybe there’s a monkey in the woods or an angel that you’ll need to fight if you want to gain tenure. Big Dark Hole is about those big, dark holes that we find ourselves once in a while and maybe, too, the big dark holes that exist inside of us.

Jeffrey Ford: Jeffrey Ford was born on Long Island in New York State in 1955 and grew up in the town of West Islip. He studied fiction writing with John Gardner at S.U.N.Y Binghamton. He’s been a college English teacher of writing and literature for thirty years. He is the author of nine novels including The Girl in the Glass and five short story collections, including A Natural History of Hell. He has received multiple World Fantasy and Shirley Jackson awards as well as the Nebula and Edgar awards among others. He lives with his wife Lynn in a century old farm house in a land of slow clouds and endless fields.