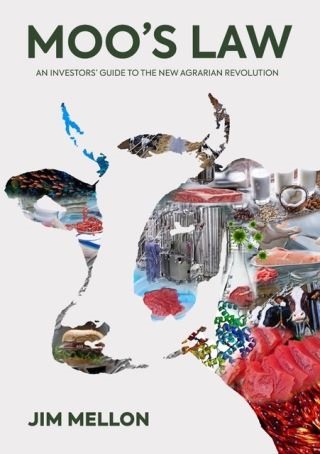 An Investor’s Guide to the New Agrarian Revolution

Moo’s Law is the latest title from successful investor Jim Mellon, to help readers understand the investment landscape in cultivated and plant-based proteins and materials. Jim has a vision that within the next couple of decades world agriculture will be radically transformed by the advent of cultivated meat technology. This book grounds the reader in why such an advancement is absolutely necessary and informs them of the investments they could make to become part of the New Agricultural Revolution themselves. The harrowing effects on our environment, animal cruelty in food and fashion, and the struggling ability to feed the world's ever-growing population gives us no choice but to grow meat in labs or derive our proteins from plant-based sources. Not only this, he outlines what he sees as the major hurdles to the industry's success in terms of scalability of production and the smart designing of regulatory frameworks to stimulate innovation in this sector. The future of food is being developed in labs across the world - it will be cleaner, safer, more ethical and, importantly soon, cheaper too! Once price parity with conventional meats is reached, there will be no turning back -- this is Moo's Law™.

Jim Mellon: Jim Mellon is an investor with an interest in several industries. After studying PPE at Oxford, Jim worked in Asia and in the US for two fund management companies, GT Management and Thornton & Co, before establishing his own business in 1991. This business is now known by two names - Charlemagne Capital, recently acquired, and Regent Pacific Group, listed in Hong Kong. Jim's private investment company, The Burnbrae Group, is a substantial landlord in Germany and the Isle of Man, and owns the group Sleepwell Hotels. Jim is chairman and major shareholder of Manx Financial Group, Port Erin Biopharma Invesments and SalvaRx Group. He is also a director of Condor Gold, Fast Forward Innovations, Portage Biotech and West African Minerals Corporation, all publicly listed companies. Amongst his many successes, Jim is well known for notching up one of the AIM market's biggest successes with the sale of Uramin to Areva, the French nuclear giant.