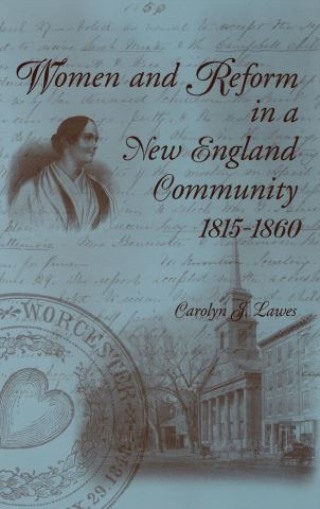 Interpretations of women in the antebellum period have long dwelt upon the notion of public versus private gender spheres. As part of the ongoing reevaluation of the prehistory of the women's movement, Carolyn Lawes challenges this paradigm and the primacy of class motivation. She studies the women of antebellum Worcester, Massachusetts, discovering that whatever their economic background, women there publicly worked to remake and improve their community in their own image. Lawes analyzes the organized social activism of the mostly middle-class, urban, white women of Worcester and finds that they were at the center of community life and leadership. Drawing on rich local history collections, Lawes weaves together information from city and state documents, court cases, medical records, church collections, newspapers, and diaries and letters to create a portrait of a group of women for whom constant personal and social change was the norm. Throughout Women and Reform in a New England Community, conventional women make seemingly unconventional choices. A wealthy Worcester matron helped spark a women-led rebellion against ministerial authority in the town's orthodox Calvinist church. Similarly, a close look at the town's sewing circles reveals that they were vehicles for political exchange as well as social gatherings that included men but intentionally restricted them to a subordinate role. By the middle of the nineteenth century, the women of Worcester had taken up explicitly political and social causes, such as an orphan asylum they founded, funded, and directed. Lawes argues that economic and personal instability rather than a desire for social control motivated women, even relatively privileged ones, into social activism. She concludes that the local activism of the women of Worcester stimulated, and was stimulated by, their interest in the first two national women's rights conventions, held in Worcester in 1850 and 1851. Far from being marginalized from the vital economic, social, and political issues of their day, the women of this antebellum New England community insisted upon being active and ongoing participants in the debates and decisions of their society and nation.