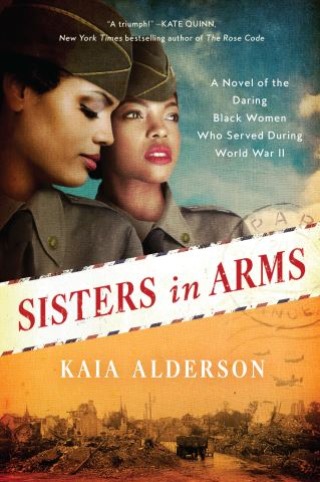 “Sisters in Arms is heartwarming but fierce, a novel brimming with camaraderie and fire, starring women you’d love to make your friends. Prickly, musical Grace and bubbly, privileged Eliza may not make the most natural allies, but it’s fight or die when they’re thrown together in the Army’s first class of female officers—and the first Black women allowed to serve their country in World War II. . . . Kaia Alderson’s debut is a triumph!”— Kate Quinn, New York Times bestselling author of The Rose Code

Kaia Alderson’s debut historical fiction novel reveals the untold, true story of the Six Triple Eight, the only all-Black battalion of the Women’s Army Corps, who made the dangerous voyage to Europe to ensure American servicemen received word from their loved ones during World War II.

Grace Steele and Eliza Jones may be from completely different backgrounds, but when it comes to the army, specifically the Women’s Army Auxiliary Corps (WAAC), they are both starting from the same level. Not only will they be among the first class of female officers the army has even seen, they are also the first Black women allowed to serve.

As these courageous women help to form the 6888th Central Postal Directory Battalion, they are dealing with more than just army bureaucracy—everyone is determined to see this experiment fail. For two northern women, learning to navigate their way through the segregated army may be tougher than boot camp. Grace and Eliza know that there is no room for error; they must be more perfect than everyone else.

When they finally make it overseas, to England and then France, Grace and Eliza will at last be able to do their parts for the country they love, whatever the risk to themselves.

Based on the true story of the 6888th Postal Battalion (the Six Triple Eight), Sisters in Arms explores the untold story of what life was like for the only all-Black, female U.S. battalion to be deployed overseas during World War II.

Kaia Alderson is a women’s historical fiction author with a passion for discovering “hidden figures” in African American women’s history. Her specific areas of interest are women’s military history, popular music, women in sports, upper-middle-class African American society, and women’s international travel. She holds a sociology degree from Spelman College and a master’s degree in education from the University of West Georgia. She honed her writing chops at the Hurston/Wright Foundation’s and VONA’s writing workshops.