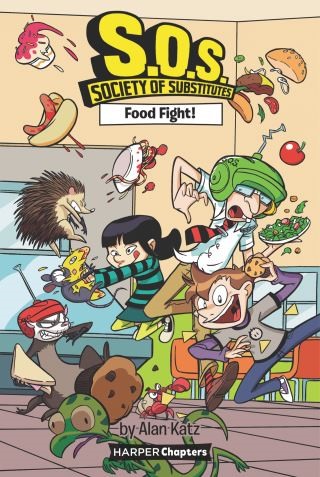 If there’s a problem in school, there’s no substitute for the world-saving substitute teachers of the S.O.S.! This is the third book of this hilarious, highly illustrated early chapter book series.

Oh, no! Noah, the classroom’s evil pet ferret, has stolen everyone’s lunch—and worse yet, he’s done it on a day when Milton’s mom, the class’s go-to super-sub, is off on another assignment.

Will Milton be able to foil Noah’s most fiendish plot yet or will they lose their lunches for good in the gooiest, stickiest, biggest food fight ever?

HarperChapters build confident readers one chapter at a time! With short, fast-paced books, art on every page, and milestone markers at the end of every chapter, they're the perfect next step for fans of I Can Read!

Alan Katz has written more than 40 highly acclaimed children’s books, including Take Me Out of the Bathtub and Other Silly Dilly Songs, The Day the Mustache Took Over, OOPS!, Really Stupid Stories for Really Smart Kids, and two Awesome Achievers titles. Alan has received many state awards for children’s literature, and he frequently visits schools across the country.