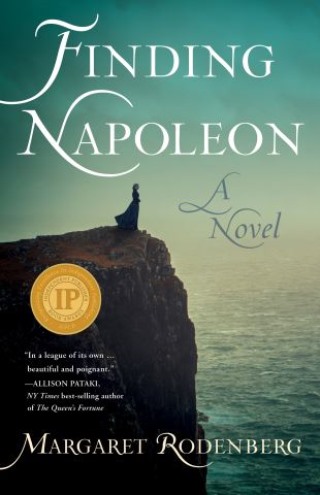 With its delightful adaptation of Napoleon Bonaparte’s real attempt to write a novel, Finding Napoleon offers a fresh take on Europe’s most powerful man after he’s lost everything. A forgotten woman of history—the audacious Albine de Montholon—narrates their tale of intrigue, love, and betrayal.

After the defeated Emperor Napoleon goes into exile on tiny St. Helena Island in the remote South Atlantic, he and his lover, Albine de Montholon, plot to escape and rescue his young son. Banding together African slaves, British sympathizers, a Jewish merchant, a Corsican rogue, and French followers, they confront British opposition—as well as treachery within their own ranks—with sometimes subtle, sometimes bold, but always desperate action.

When Napoleon and Albine break faith with one another, ambition and Albine’s husband threaten their reconciliation. To survive, Albine must decide whom to betray. To succeed, Napoleon must learn whom to trust.

Margaret Rodenberg: Margaret Rodenberg’s passion for French history began when she lived in France as a young teen with her US Navy family. An avid traveler who has visited over sixty countries, she has journeyed more than 30,000 miles to conduct Napoleonic research, including to St. Helena Island in the remote South Atlantic. She’s a former businesswoman, an award-winning writer, and a proud director of the Napoleonic Historical Society, a non-profit that promotes knowledge of the Napoleonic era. Her website, www.margaretrodenberg.com, reports on Napoleon’s ongoing presence in world culture. Finding Napoleon is her first novel.