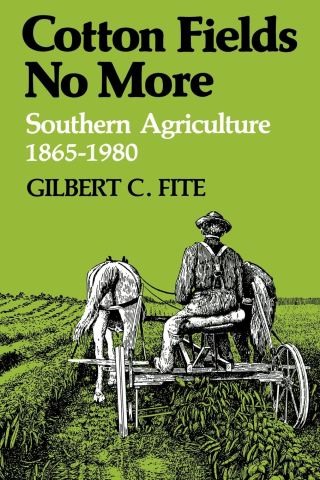 No general history of southern farming since the end of slavery has been published until now. For the first time, Gilbert C. Fite has drawn together the many threads that make up commercial agricultural development in the eleven states of the old Confederacy, to explain why agricultural change was so slow in the South, and then to show how the agents of change worked after 1933 to destroy the old and produce a new agriculture.

Fite traces the decline and departure of King Cotton as the hard taskmaster of the region, and the replacement of cotton by a somewhat more democratically rewarding group of farm products: poultry, cattle, swine; soybeans; citrus and other fruits; vegetables; rice; dairy products; and forest products. He shows how such crop changes were related to other developments, such as the rise of a capital base in the South, mainly after World War II; technological innovation in farming equipment; and urbanization and regional population shifts.

Based largely upon primary sources, Cotton Fields No More will become the standard work on post-Civil War agriculture in the South. It will be welcomed by students of the American South and of United States agriculture, economic, and social history.

Gilbert C. Fite: Gilbert C. Fite is Richard B. Russell Professor of History at the University of Georgia. He is the author of American Farmers: The New Minority, Beyond the Fencerows: A History of Farmland Industries Inc., 1929–1978 and other books.