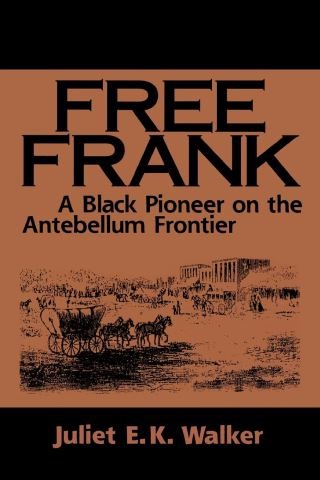 A Black Pioneer on the Antebellum Frontier

The story of Free Frank is not only a testament to human courage and resourcefulness but affords new insight into the American frontier. Born a slave in the South Carolina piedmont in 1777, Frank died a free man in 1854 in a town he had founded in western Illinois. His accomplishments, creditable for any frontiersman, were for a black man extraordinary.

We first learn details of Frank's life when in 1795 his owner moved to Pulaski County, Kentucky. We know that he married Lucy, a slave on a neighboring farm, in 1799. Later he was allowed to hire out his time, and when his owner moved to Tennessee, Frank was left in charge of the Kentucky farm. During the War of 1812, he set up his own saltpeter works, an enterprise he maintained until he left Kentucky. In 1817 he purchased his wife's freedom for $800; two years later he bought his own liberty for the same price. Now free, he expanded his activities, purchasing land and dealing in livestock.

With his wife and four of his children, Free Frank left Kentucky in 1830 to settle on a new frontier. In Pike County, Illinois, he purchased a farm and later, in 1836, platted and successfully promoted the town of New Philadelphia. The desire for freedom was an obvious spur to his commercial efforts. Through his lifetime of work he purchased the liberty of sixteen members of his family at a cost of nearly $14,000.

Goods and services commanded a premium in the life of the frontier. Free Frank's career shows what an exceptional man, through working against great odds, could accomplish through industry, acumen, and aggressiveness. His story suggests a great deal about business activity and legal practices, as well as racial conditions, on the frontier.

Juliet Walker has performed a task of historical detection in recreating the life of Free Frank from family traditions, limited personal papers, public documents, and secondary sources. In doing so, she has added a significant chapter to the history of African Americans.