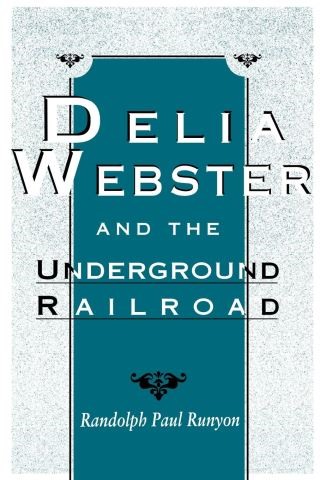 Delia Webster and the Underground Railroad

In this captivating tale, Randolph Paul Runyon follows the trail of the first woman imprisoned for assisting runaway slaves and explores the mystery surrounding her life and work. In September 1844, Delia Webster took a break from her teaching responsibilities at Lexington Female Academy and accompanied Calvin Fairbank, a Methodist preacher from Oberlin College, on a Saturdary drive in the country. At the end of their trip, their passengers—Lewis Hayden and his family—remained in southern Ohio, ticketed for the Underground Railroad. Webster and Fairbank returned to a near riot and jail cells. Webster earned a sentence to the state penitentiary in Frankfort, where the warden, Newton Craig, married and a father, became enamored of her and was tempted into a compromising relationship he would come to regret. Hayden reached freedom in Boston, where he became a prominent businessman, the ringleader in the courthouse rescue of a fugitive slave, and the last link in the chain of events that led to the Harpers Ferry Raid. Webster, the focal point at which these lives intersect, remains an enigma. Was she, as one contemporary noted, "A young lady of irreproachable character?" Or, as another observed, "a very bold and defiant kind of woman, without a spark of feminine modesty, and, withal, very shrewd and cunning?" Runyon has doggedly pursued every historical lead to bring color and shape to the tale of these fascinating characters.

Randolph Paul Runyon: Randolph Paul Runyon is a retired professor of French and the author of twelve other books, including two on Kentucky history: The Mentelles: Mary Todd Lincoln, Henry Clay, and the Immigrant Family Who Educated Antebellum Kentucky and Delia Webster and the Underground Railroad.