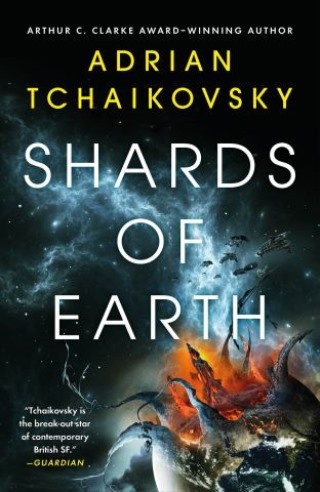 The Arthur C. Clarke award-winning author of Children of Time brings us an extraordinary space opera about humanity on the brink of extinction, and how one man's discovery will save or destroy us all.

The war is over. Its heroes forgotten. Until one chance discovery . . .
Idris has neither aged nor slept since they remade him in the war. And one of humanity's heroes now scrapes by on a freelance salvage vessel, to avoid the attention of greater powers.
After earth was destroyed, mankind created a fighting elite to save their species, enhanced humans such as Idris. In the silence of space they could communicate, mind-to-mind, with the enemy. Then their alien aggressors, the Architects, simply disappeared—and Idris and his kind became obsolete.
Now, fifty years later, Idris and his crew have discovered something strange abandoned in space. It's clearly the work of the Architects—but are they returning? And if so, why? Hunted by gangsters, cults and governments, Idris and his crew race across the galaxy hunting for answers. For they now possess something of incalculable value, that many would kill to obtain.

Adrian Tchaikovsky was born in Woodhall Spa, Lincolnshire, and headed off to university in Reading to study psychology and zoology. For reasons unclear even to himself, he subsequently ended up in law. Adrian has since worked as a legal executive in both Reading and Leeds and now writes full time. He also lives in Leeds, with his wife and son. Adrian is a keen live role-player and occasional amateur actor. He has also trained in stage-fighting and keeps no exotic or dangerous pets of any kind—possibly excepting his son.