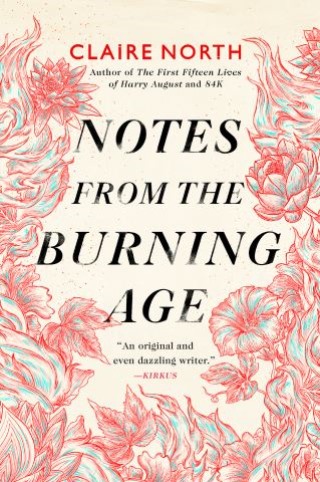 Notes from the Burning Age

“ONE OF THE BEST BOOKS I'VE READ IN RECENT YEARS. THOUGHT PROVOKING, IMAGINATIVE AND PACKS A HELL OF AN EMOTIONAL PUNCH.” —Adrian Tchaikovsky, author of Children of Time

Ven was once a holy man, a keeper of ancient archives. It was his duty to interpret archaic texts, sorting useful knowledge from the heretical ideas of the Burning Age—a time of excess and climate disaster. For in Ven's world, such material must be closely guarded so that the ills that led to that cataclysmic era can never be repeated.

But when the revolutionary Brotherhood approaches Ven, pressuring him to translate stolen writings that threaten everything he once held dear, his life will be turned upside down. Torn between friendship and faith, Ven must decide how far he's willing to go to save this new world—and how much he is willing to lose.

Also by Claire North:
The First Fifteen Lives of Harry August
Touch
The Sudden Appearance of Hope
The End of the Day
84K
The Gameshouse
The Pursuit of William Abbey

Claire North: Claire North is a pseudonym for Catherine Webb, who wrote several novels in various genres before publishing her first major work as Claire North, The First Fifteen Lives of Harry August. It was a critically acclaimed success, receiving rave reviews and an Audie nomination, and was included in the Washington Post's Best Books of the Year list. Her novel, The Sudden Appearance of Hope, won the World Fantasy Award for Best Novel. Catherine currently works as a theatre lighting designer and is a fan of big cities, urban magic, Thai food and graffiti-spotting. She lives in London.