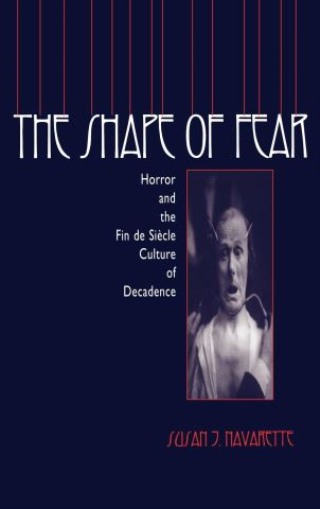 The Shape of Fear

Horror and the Fin de Siècle Culture of Decadence

During the last decades of the nineteenth century, Charles Darwin, Thomas Henry Huxley, Walter Pater and others changed the nature of thought concerning the human body and the physical environment that had shaped it. In response, the 1890s saw the publication of a series of remarkable literary works that had their genesis in the intense scientific and aesthetic activity of those preceding decades—texts that emphasized themes of degeneration and were themselves stylistically decompositive, with language both a surrogate for physical deformity and a source of anxiety. Susan J. Navarette examines the ways in which scientific and cultural concerns of late nineteenth-century England are coded in the horror literature of the period. By contextualizing the structural, stylistic, and thematic systems developed by writers seeking to reenact textually the entropic forces they perceived in the natural world, Navarette reconstructs the late Victorian mentalité. She analyzes aesthetic responses to trends in contemporary science and explores horror writers' use of scientific methodologies to support their perception that a long-awaited period of cultural decline had begun. In her analysis of the classics Turn of the Screw and Heart of Darkness, Navarette shows how James and Conrad made artistic use of earlier "scientific" readings of the body. She also considers works by lesser-known authors Walter de la Mare, Vernon Lee, and Arthur Machen, who produced fin de siècle stories that took the form of "hybrid literary monstrosities." To underscore the fascination with bodily decay and deformation that these writers explored, The Shape of Fear is enhanced with prints and line drawings by Victor Hugo, James Ensor, and other artists of the day. This elegantly written book formulates a new canon of late Victorian fiction that will intrigue scholars of literature and cultural history.