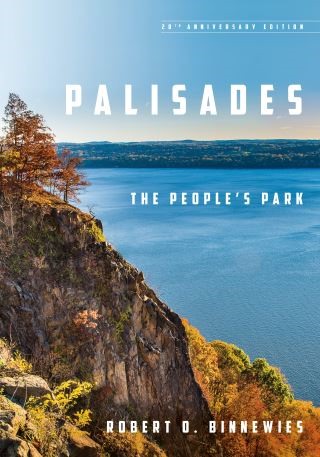 How the famous and not-so-famous like-minded citizens all gave their time, expertise, and money to build a park legacy of incomparable benefit

The Palisades park and historic site system in New York and New Jersey is a significant anchor-point for the spread of national and state parks across the nation. The challenge to protect these treasures began with a brutal blast of dynamite in the late nineteenth century and continues to this day. Palisades: The People’s Park presents the story of getting from zero protected acres to the rich tapestry that is today’s Palisades park system, located in the nation’s most densely populated metropolitan region. This is an account of huge determination, moments of crisis, caustic resistance to the very idea of conservation, glorious philanthropy, a steep learning curve, and responsibilities for guardianship passed with care from one generation to the next.

Despite the involvement of men of great wealth and fame from its earliest beginnings, the Palisades Interstate Park Commission faced an early and ongoing struggle to arrange financial support from both the New York and New Jersey state governments for a park that would cross state lines. The conflicts between developers and conservationists, industrialists and wilderness enthusiasts, with their opposing views regarding the uses of natural resources required the commissioners of the PIPC to become skilled negotiators, assiduous fundraisers, and savvy participants in the political process. The efforts to create Palisades Interstate Park was prodigious, requiring more than 1,000 real estate transactions to establish Sterling Forest, to save Storm King Mountain, to preserve Lake Minnewaska, to protect Stony Point Battlefield and Washington’s headquarters, to open Bear Mountain and Harriman state parks, and to add the other sixteen parks to the Palisades Interstate Park System.

Beginning with the efforts of Elizabeth Vermilye of the New Jersey Federation of Women’s Clubs, who enlisted President Theodore Roosevelt’s support to stop the blasting and quarrying of Palisades rock, author Robert Binnewies traces the story of the famous, including J. P. Morgan, the Rockefellers, and the Harrimans, as well as the not-so-famous men and women whose donations of time and money led to the preservation of New York and New Jersey’s most scenic and historic lands. The park experiment, begun in 1900, still stands as a dynamic model among the nation’s major environmental achievements.

Robert O. Binnewies: Robert O. Binnewies was Executive Director of the Palisades Interstate Park Commission throughout the 1990s. During a conservation career that spanned nearly forty years, he also served as Superintendent of Yosemite National Park, Vice President of the National Audubon Society, and Executive Director of the Maine Coast Heritage Trust.