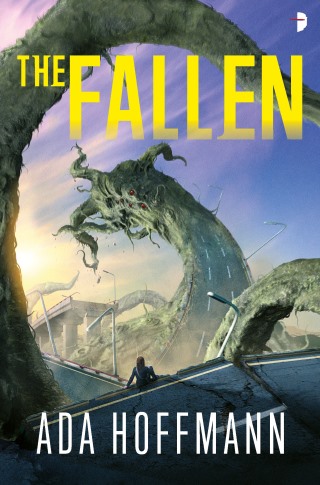 From the immersive and intoxicating world of The Outside, comes the exhilarating sequel from Philip K Dick and Compton Crook Award-nominated author, Ada Hoffmann.

The laws of physics acting on the planet of Jai have been forever upended; its surface completely altered, and its inhabitants permanently changed, causing chaos. Fearing heresy, the artificially intelligent Gods that once ruled the galaxy became the planet’s jailers.

Tiv Hunt, who once trusted these Gods completely, spends her days helping the last remaining survivors of Jai. Everyone is fighting for their freedom and they call out for drastic action from their saviour, Tiv’s girlfriend Yasira. But Yasira has become deeply ill, debilitated by her Outside exposure, and is barely able to breathe, let alone lead a revolution.

Hunted by the Gods and Akavi, the disgraced angel, Yasira and Tiv must delve further than ever before into the maddening mysteries of their fractured planet in order to save – or perhaps even destroy – their fading world.

Ada Hoffmann: Ada Hoffmann is the author of the space opera novel The Outside, as well as dozens of speculative short stories and poems. Ada’s work has been a finalist for the Philip K. Dick Award, the Compton Crook Award, and the WSFA Small Press Award, among others. She is also the author of the Autistic Book Party review series, devoted to in-depth #ownvoices discussions of autism representation in speculative fiction.
Ada is an adjunct professor of computer science, as well as a former semi-professional soprano, tabletop gaming enthusiast, and LARPer. She lives in eastern Ontario.