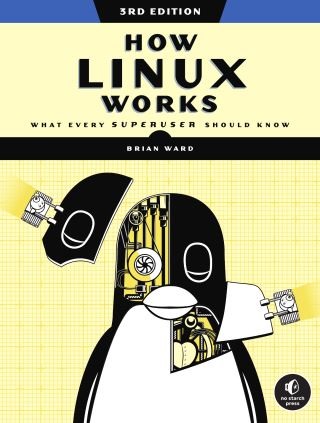 What Every Superuser Should Know

Best-selling guide to the inner workings of the Linux operating system with over 50,000 copies sold since its original release in 2014.

Unlike some operating systems, Linux doesn’t try to hide the important bits from you—it gives you full control of your computer. But to truly master Linux, you need to understand its internals, like how the system boots, how networking works, and what the kernel actually does.

In this third edition of the bestselling How Linux Works, author Brian Ward peels back the layers of this well-loved operating system to make Linux internals accessible. This edition has been thoroughly updated and expanded with added coverage of Logical Volume Manager (LVM), virtualization, and containers.

• How Linux boots, from boot loaders to init (systemd)
• How the kernel manages devices, device drivers, and processes
• How networking, interfaces, firewalls, and servers work
• How development tools work and relate to shared libraries
• How to write effective shell scripts
You’ll also explore the kernel and examine key system tasks inside user space, including system calls, input and output, and filesystems. With its combination of background, theory, real-world examples, and patient explanations, How Linux Works, 3rd edition will teach you what you need to know to solve pesky problems and take control of your operating system.