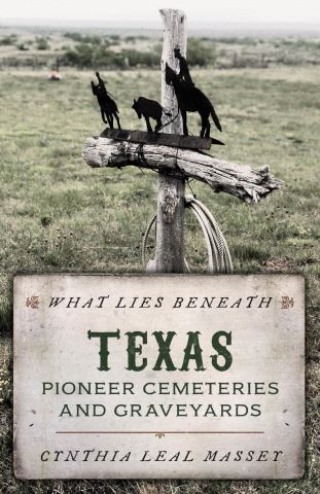 Texas, the second largest state, both in land mass and population, has more than 50,000 cemeteries, graveyards, and burial grounds. As the final resting places of those whose earthly journey has ended, they are also repositories of valuable cultural history. The pioneer cemeteries—those from the 19th century—provide a wealth of information on the people who settled Texas during its years as a Republic (1836-1845), and after it became the 28th state in 1845. In What Lies Beneath: Texas Pioneer Cemeteries and Graveyards, author Cynthia Leal Massey exhumes the stories of these pioneers, revealing the intriguing truth behind the earliest graveyards in the Lone Star State, including some of its most ancient. This guide also provides descriptions of headstone features and symbols, and demystifies the burial traditions of early Texas pioneers and settlers.

Cynthia Leal Massey combines her background in journalism and love of history to write award-winning historical fiction and nonfiction history. A former corporate editor, college instructor, and magazine editor, she has published hundreds of magazine and newspaper articles and several books. Born and raised on the south side of San Antonio, Texas, Massey has resided in Helotes, twenty miles northwest of the Alamo City, since 1994. A full-time writer, she is a past president of Women Writing the West.