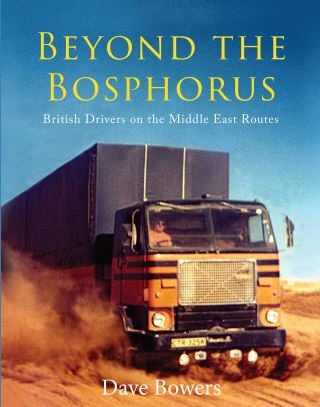 Beyond the Bosphorus: British Drivers on the Middle-East Routes

The Middle East has always been one of the most challenging destinations for lorry drivers. In the 1970s and 80s, many drivers may not have even heard of the destinations they were sent to before heading out eastwards. Along the way they endured extreme weather conditions, bureaucratic nightmares, and the physical trials of keeping themselves and their trucks operational over many thousands of miles of poorly maintained and dangerous roads. Their adventures have become legendary within the trucking world.In this book Dave Bowers tells with humour and insight the amazing stories of people driving to Middle East destinations, battling against all the odds to deliver their loads. The inspiration comes from his own experience through those routes and in particular on one adventurous journey homewards from Tehran in 1975, when he happened to be stranded in Iran, with no cash to speak of and spending many nights sleeping in abandoned trailers along the way. Dave travelled homewards after he was given lifts in trucks returning to Europe. These were driven by drivers who had many tales to tell, and this book was motivated by the need to keep these fascinating stories alive.Illustrated with photographs of the drivers and vehicles taken at the time, Beyond the Bosphorus records what it was like for ordinary HGV drivers to get involved in something so dramatically different from their everyday working lives in the UK. It will be of interest to lorry drivers, general vehicle enthusiasts and also those with a historical and social interest in the Middle East alike.

Dave Bowers: Dave Bowers is a full-time freelance journalist. He has been writing features on trucks, the road haulage industry, travel, history, classic cars, tractors and repairing vehicles for a number of magazines, including Truck and Driver, Trucking, Heritage Commercials and Classic Truck for over 20 years.He has travelled extensively as a backpacker and travelled the Middle-East route during the 1970s with a number of Middle-East drivers of different nationalities.