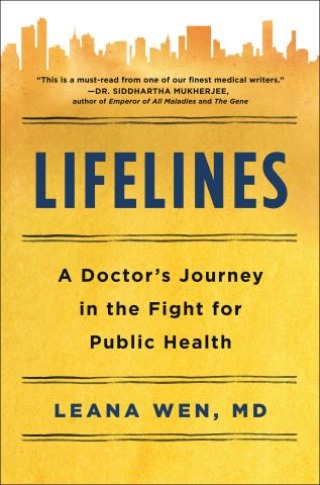 A Doctor's Journey in the Fight for Public Health

From medical expert Leana Wen, MD, Lifelines is an insider's account of public health and its crucial role—from opioid addiction to global pandemic—and an inspiring story of her journey from struggling immigrant to being one of Time’s 100 Most Influential People.

“Public health saved your life today—you just don’t know it,” is a phrase that Dr. Leana Wen likes to use. You don’t know it because good public health is invisible. It becomes visible only in its absence, when it is underfunded and ignored, a bitter truth laid bare as never before by the devastation of COVID-19.

Wen also tells her own uniquely American story: an immigrant from China, she and her family received food stamps and were at times homeless despite her parents working multiple jobs. That child went on to attend college at thirteen, become a Rhodes scholar, and turn to public health as the way to make a difference in the country that had offered her such possibilities.

Ultimately, she insists, it is public health that ensures citizens are not robbed of decades of life, and that where children live does not determine whether they live.

Dr. Leana Wen: Dr. Leana Wen is an emergency physician, public health professor at George Washington University, and nonresident senior fellow at the Brookings Institution. She is also a contributing columnist for the Washington Post and a CNN medical analyst. Previously, she served as Baltimore’s health commissioner, where she led the nation’s oldest continuously operating public health department. She is the author of the patient advocacy book, When Doctors Don’t Listen: How to Avoid Misdiagnoses and Unnecessary Tests and the new memoir, Lifelines: A Doctor's Journey in the Fight for Public Health. Dr. Wen lives with her husband and their two young children in Baltimore.