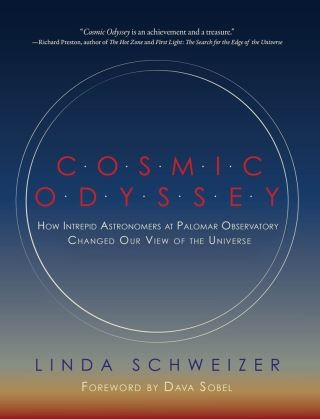 Ever since 1936, pioneering scientists at Palomar Observatory in Southern California have pushed against the boundaries of the known universe, making a series of dazzling discoveries that changed our view of the cosmos: quasars, colliding galaxies, supermassive black holes, brown dwarfs, supernovae, dark matter, the never-ending expansion of the universe, and much more. In Cosmic Odyssey, astronomer Linda Schweizer tells the story of the men and women at Palomar and their efforts to decipher the vast energies and mysterious processes that govern our universe.

Linda Schweizer: Linda Schweizer holds a PhD in astronomy from the University of California, Berkeley. She has observed at many observatories, published in astronomical journals, and taught science writing and was a Visiting Scholar at the California Institute of Technology, all while raising four daughters.