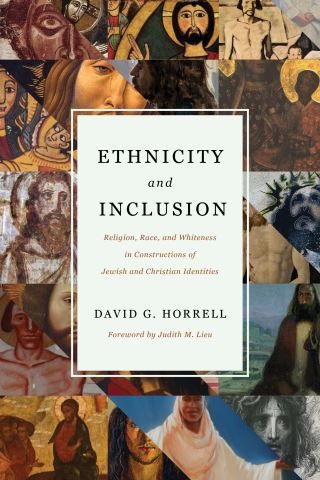 Religion, Race, and Whiteness in Constructions of Jewish and Christian Identities

Some of today’s problematic ideologies of racial and religious difference can be traced back to constructions of the relationship between Judaism and early Christianity. New Testament studies, which developed contemporaneously with Europe’s colonial expansion and racial ideologies, is, David Horrell argues, therefore an important site at which to probe critically these ideological constructions and their contemporary implications.

In Ethnicity and Inclusion, Horrell explores the ways in which “ethnic” (and “religious”) characteristics feature in key Jewish and early Christian texts, challenging the widely accepted dichotomy between a Judaism that is ethnically defined and a Christianity that is open and inclusive. Then, through an engagement with whiteness studies, he offers a critique of the implicit whiteness and Christianness that continue to dominate New Testament studies today, arguing that a diversity of embodied perspectives is epistemologically necessary.