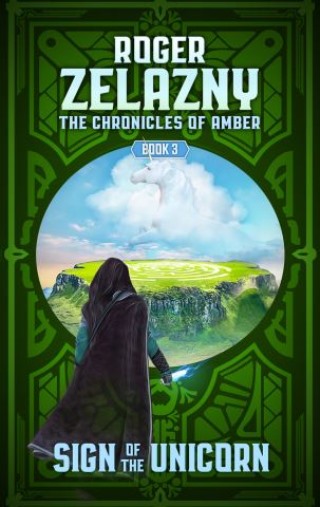 Sign of the Unicorn is the third book in Roger Zelazny’s incomparable Chronicles of Amber series.

Amber is safe, for now, from the invaders of the black road. But someone has killed Cain and has framed Corwin for the murder. Believing that the murder of Cain is related to the mysterious disappearance of his brother Brand, Corwin calls the family together to try to combine all of their powers to reach Brand. Betrayal and suspicion follow; Amber is once again threatened with destruction by internal strife. Epic in scope and beautifully written by a master stylist.

Roger Zelazny was a New York Times best selling science fiction and fantasy writer, a six time Hugo Award winner, and a three time Nebula Award Winner. He published more than forty novels in his lifetime. His first novel This Immortal, serialized in The Magazine of Fantasy and Science Fiction under the title ...And Call Me Conrad, won the Hugo Award for best novel. Lord of Light, his third novel, also won the Hugo award and was nominated for the Nebula award.

He died at age 58 from colon cancer. Zelazny was posthumously inducted into the Science Fiction Hall of Fame in 2010.