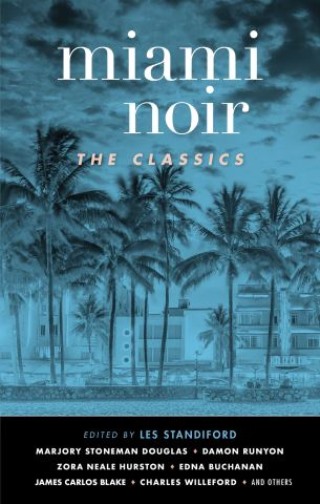 The long-awaited sequel to 2006's best-selling Miami Noir highlights an outstanding tradition of legendary writers exploring the dark side of paradise.

"The 19 stories featured in the superb Miami Noir: The Classics are solidly entertaining and a thoughtful history about life, crime and punishment in South Florida."
--South Florida Sun-Sentinel

"Miami hasn’t been around for long, as cities go--just a little over a century. But it's been fertile ground for crime fiction almost from the beginning. The evidence is clear in Miami Noir: The Classics...[Standiford's] choices for the 19 stories in this volume are fascinating."
--Tampa Bay Times

"Miami has long trembled on a knife’s edge between paradise and underworld, retirement community and dark web, sunny metropolis and criminal clearinghouse. The 19 stories collected by local author Standiford in [Miami Noir: The Classics] speak to this singular dichotomy."
--Boca Mag, recommended by Mitch Kaplan

"The 19 selections in this welcome reprint anthology in Akashic's noir series enshrine the dark side of Miami...This historical survey makes a fine case for Miami as a timeless setting for great crime fiction."
--Publishers Weekly

"A collection that shows how far a city can come and still maintain a strong noir tradition."
--Kirkus Reviews

"All these stories embedded within this historical survey, make a fine case for Miami as a timeless setting for great crime fiction."
--Exclusive Magazine

"For different reasons these stories cultivate a little something special, a radiance, a humanity, even a grace, in the midst of the noir gloom, and thereby set themselves apart. Variety, familiarity, mood and tone, and the occasional gem of a story make Miami Noir a collection to savor."
--Miami Herald

"For such a sun-stoked place, Miami sure is shady. Shadowy, too. Even at highest noon. Maybe it's the heat. Maybe it's the humidity. And maybe, just maybe, it's our destiny...With echoes of Charles Willeford's Hoke Mosely series, the Miami books of Elmore Leonard, the quirk of Carl Hiaasen, who never met a shady character he didn't wanna write, and Edna Buchanan, who seems to know all the shadows, this batch of dirty deep South Florida fiction might just send you packing...your own heat."
--SunPost

Akashic Books continues its award-winning series of original noir anthologies, launched in 2004 with Brooklyn Noir. Each volume comprises stories set in a distinct neighborhood or location within the respective city.

From the introduction by Les Standiford:

Despite the fact that Miami has in the past decade-plus added a downtown performing arts complex to outdo all but the Kennedy Center in DC, a jaw-dropping art museum by the Biscayne Bay, an exemplary science museum, the establishment of the world-renowned Art Basel festival on Miami Beach, and so much more...the operative literary form to portray Miami--the essential aria of the Magic City--is spun from threads of mystery and yearning and darkness...

When terrible things threaten in some ominous neighborhoods, in some tough cities, a reader of a story set in those locales might be forgiven for expecting the worst; but when calamity takes place against the backdrop of paradise, as we have here in Miami, the impact is all the greater.