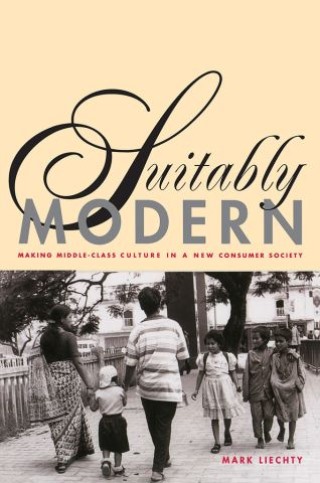 Suitably Modern traces the growth of a new middle class in Kathmandu as urban Nepalis harness the modern cultural resources of mass media and consumer goods to build modern identities and pioneer a new sociocultural space in one of the world's "least developed countries."


Since Nepal's "opening" in the 1950s, a new urban population of bureaucrats, service personnel, small business owners, and others have worked to make a space between Kathmandu's old (and still privileged) elites and its large (and growing) urban poor. Mark Liechty looks at the cultural practices of this new middle class, examining such phenomena as cinema and video viewing, popular music, film magazines, local fashion systems, and advertising. He explores three interactive and mutually constitutive ethnographic terrains: a burgeoning local consumer culture, a growing mass-mediated popular imagination, and a recently emerging youth culture. He shows how an array of local cultural narratives--stories of honor, value, prestige, and piety--flow in and around global narratives of "progress," modernity, and consumer fulfillment. Urban Nepalis simultaneously adopt and critique these narrative strands, braiding them into local middle-class cultural life.


Building on both Marxian and Weberian understandings of class, this study moves beyond them to describe the lived experience of "middle classness"--how class is actually produced and reproduced in everyday practice. It considers how people speak and act themselves into cultural existence, carving out real and conceptual spaces in which to produce class culture.

Mark Liechty: Mark Liechty is Assistant Professor of Anthropology and History at the University of Illinois at Chicago. He is coeditor of the journal Studies in Nepali History and Society.