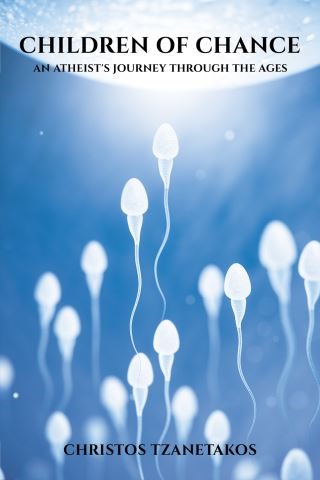 An Atheist's Journey Through the Ages

Children of Chance - An Atheist's Journey Through the Ages takes the reader back to the 7th century BCE, narrating the thoughts and achievements of the Greek Ionian thinkers who first established western civilization's scientific method. In the following chapters, the author narrates the abuses perpetrated by organized religion throughout the ages and the struggle of pioneer scientists to cope with dogmatic concepts. In the epilogue, the author laments the current situation on Earth perpetrated by the influence of what he calls "impostors," religion, and nationalism.

Christos Tzanetakos: Christos Tzanetakos, born December 23rd, 1938, in Greece, became a U.S. citizen on September 3rd, 1975. He received his formal education in Athens. Majoring in engineering, he graduated from the Merchant Marine Academy of Aspropyrgos, Greece, in 1959.
Seafaring brought him around the globe, and he directly witnessed the exploitation of many native peoples by missionaries and their destructive effects upon the native cultures. Ever since, the following profound statement by Jomo Kenyatta has had a lasting impact on his thoughts.
When the missionaries arrived, the Africans had the land and the missionaries had the Bible. They taught us to pray with our eyes closed. When we opened them, they had the land and we had the Bible.
Christos is a member of the American Association for the Advancement of Science since 1987.
In 1992, he founded the democratically structured Atheists of Florida Inc.
From 1993 to 1997, he produced 60 half-hour television programs for the public access, with topics ranging from state-church separation to current scientific and philosophical issues. The programs won the prestigious Southern Sunshine Video Award in the Educational category for 1996 and 1997, receiving the first place for outstanding community programming.
In 1993, he was elected co-president of Atheist Alliance Inc., a position he held for two consecutive terms.
In June, 1995, he participated in the International Conference on Human Behavior and the Meaning of Modern Humanism held in Delphi, Greece. As representative of Atheists of Florida Inc. and the Atheist Alliance, he signed the Delphi Declaration.
In 1995, he founded the Mark Twain Scholarship Fund Inc., to assist young atheists with their post-secondary education.
Mr. Tzanetakos adheres to the profound statement of Emile Zola:
"Civilization will thrive when the last stone from the last church falls on the last priest."