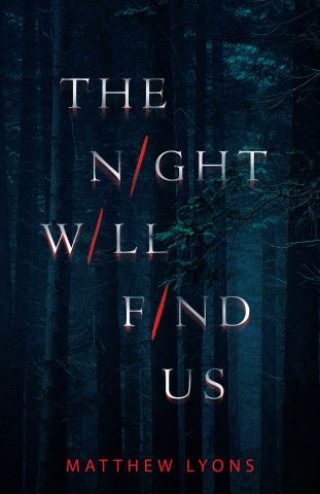 The Night Will Find Us

They say never go into the woods at night…

School’s out for summer and that means one thing to Parker, Chloe, and their four friends: a well-deserved camping trip in the Pine Barrens, a million-acre forest deep in the heart of New Jersey. But when old grudges erupt, an argument escalates into the unthinkable, leaving one of them dead and the killer missing. As darkness descends and those left alive try to determine a course of action, the forest around them begins to change…

In the morning, more of the group has vanished and the path that led them into the woods is gone—as if consumed by the forest itself. Lost and hungry, the remaining friends set out to find help, only to realize that the forest seems to have other plans—a darker, ancient horror lies dead and dreaming in a lake in the center of the woods. And it’s calling to them.

Meanwhile, deep in the trees, the killer is still at large, and one of the group’s own has started to transform and warp into something other. Something inhuman. Something that wants to feast.

Banding together to survive, the friends soon begin to understand the true nature of the horror waiting for them in the Pine Barrens—and that not all of them will make it out alive.

Matthew Lyons is the author of dozens of short stories, with his work appearing in the 2018 edition of Best American Short Stories (edited by Roxane Gay) and more. Born and raised in Colorado, he lives with his wife and their cat.