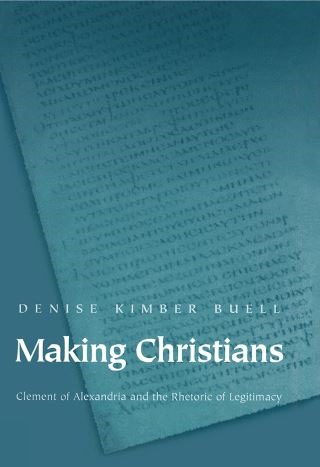 Clement of Alexandria and the Rhetoric of Legitimacy

How did second-century Christians vie with each other in seeking to produce an authoritative discourse of Christian identity? In this innovative book, Denise Buell argues that many early Christians deployed the metaphors of procreation and kinship in the struggle over claims to represent the truth of Christian interpretation, practice, and doctrine. In particular, she examines the intriguing works of the influential theologian Clement of Alexandria (ca. 150-210 c.e.), for whom cultural assumptions about procreation and kinship played an important role in defining which Christians have the proper authority to teach, and which kinds of knowledge are authentic.


Buell argues that metaphors of procreation and kinship can serve to make power differentials appear natural. She shows that early Christian authors recognized this and often turned to such metaphors to mark their own positions as legitimate and marginalize others as false. Attention to the functions of this language offers a way out of the trap of reconstructing the development of early Christianity along the axes of "heresy" and "orthodoxy," while not denying that early Christians employed this binary. Ultimately, Buell argues, strategic use of kinship language encouraged conformity over diversity and had a long lasting effect both on Christian thought and on the historiography of early Christianity.


Aperceptive and closely argued contribution to early Christian studies, Making Christians also branches out to the areas of kinship studies and the social construction of gender.