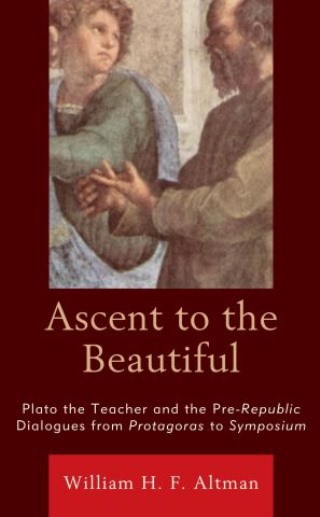 Ascent to the Beautiful

With Ascent to the Beautiful, William H. F. Altman completes his five-volume reconstruction of the Reading Order of the Platonic dialogues. This book covers Plato’s elementary dialogues, grappling from the start with F. D. E. Schleiermacher, who created an enduring prejudice against the works Plato wrote for beginners. Recognized in antiquity as the place to begin, Alcibiades Major was banished from the canon but it was not alone: with the exception of Protagoras and Symposium, Schleiermacher rejected as inauthentic all seven of the dialogues this book places between them. In order to prove their authenticity, Altman illuminates their interconnections and shows how each prepares the student to move beyond self-interest to gallantry, and thus from the doctrinal intellectualism Aristotle found in Protagoras to the emergence of philosophy as intermediate between wisdom and ignorance in Symposium, en route to Diotima’s ascent to the transcendent Beautiful. Based on the hypothesis that it was his own eminently teachable dialogues that Plato taught—and bequeathed to posterity as his Academy’s eternal curriculum—Ascent to the Beautiful helps the reader to imagine the Academy as a school and to find in Plato the brilliant teacher who built on Homer, Thucydides, and Xenophon.

William H. F. Altman, retired from public education, is an independent scholar working on the continuation of Plato the Teacher.