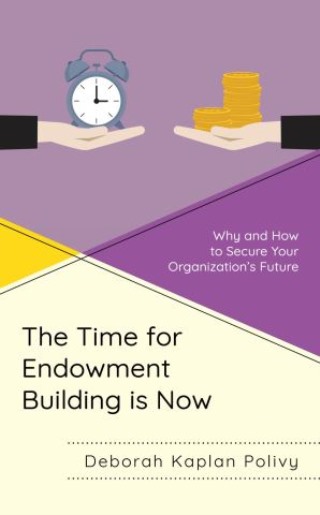 The Time for Endowment Building Is Now

Why and How to Secure Your Organization's Future

The Time for Endowment Building is Now: Why and How to Secure Your Organization’s Future describes endowment contributions both through outright and deferred gift giving. It puts the concept of endowment development front and center and explains the steps and mindset that are necessary to create the capacity to build and increase the endowment of an organization.

The role and responsibility of the executive and the board in encouraging endowment development are described, and a chapter is devoted to the identification of endowment prospects not through wealth analysis or “major gift giving” but by donative history.

A highlight of the book is a case study of the Harold Grinspoon Foundation’s LIFE & LEGACY Program that provides training and mentoring as well as incentives to local community-based organizations to encourage the building of endowment funds.

The book will be particularly appealing to boards and staff members of those not-for-profit organizations contemplating whether to launch an endowment program or are in the beginning stages of doing so. This book will be valuable to veterans in the field considering their policies in relation to the use of endowment contributions as well as the marketing of them to prospects and donors. It will also be of interest to those teaching fundraising courses in not-for-profit management programs.

Deborah Kaplan Polivy served as the Director of the Endowment Foundation of both the Jewish Federation of Greater Springfield (Massachusetts) and New Haven (Connecticut). She started both of these organizations “from scratch” and also began a formal endowment development effort at Goodspeed Musicals, the original producer of Annie, as well as Connecticut Public Television.

As a consultant, Polivy has helped numerous organizations create endowment programs including training boards and staff on gift giving; developing recognition policies and procedures, as well as those for investing and managing monies; creating marketing materials and designing strategic plans for launching and implementing the respective efforts.

Polivy has conducted workshops across the United States and in Israel and has written numerous articles on the nonprofit sector in general and endowment development in particular. Her doctoral degree is from The Heller School for Social Policy and Management at Brandeis University where she is a member of the Board of Advisors.