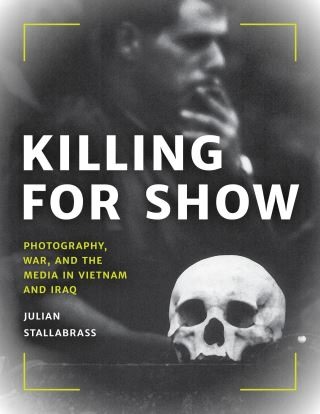 Photography, War, and the Media in Vietnam and Iraq

In the autumn of 2014, the Royal Air Force released blurry video of a missile blowing up a pick-up truck which may have had a weapon attached to its flatbed. This was a lethal form of gesture politics: to send a £9-million bomber from Cyprus to Iraq and back, burning £35,000 an hour in fuel, to launch a smart missile costing £100,000 to destroy a truck or, rather, to create a video that shows it being destroyed. Some lives are ended—it is impossible to tell whose—so that the government can pretend that it taking effective action by creating a high-budget snuff movie. This is killing for show.

Since the Vietnam War the way we see conflict—through film, photographs, and pixels—has had a powerful impact on the political fortunes of the campaign, and the way that war has been conducted. In this fully illustrated and passionately argued account of war imagery, Julian Stallabrass tells the story of post-war conflict, how it was recorded and remembered through its iconic photography.

The relationship between war and photograph is constantly in transition, forming new perspectives, provoking new challenges: what is allowed to be seen? Does an image have the power to change political opinion? How are images used to wage war? Stallabrass shows how photographs have become a vital weapon in the modern war: as propaganda—from close-quarters fighting to the drone’s electronic vision—as well as a witness to the barbarity of events such as the My Lai massacre, the violent suppression of insurgent Fallujah or the atrocities in Abu Ghraib.

Through these accounts Stallabrass maps a comprehensive theoretical re-evaluation of the relationship between war, politics and visual culture.

Julian Stallabrass: Julian Stallabrass is a writer, photographer, curator and lecturer. He is Professor of art history at the Courtauld Institute of Art, and is the author of Art Incorporated, Oxford University Press 2006 (updated edition forthcoming), Internet Art: The Online Clash Between Culture and Commerce, Tate Publishing, London 2003; Paris Pictured, Royal Academy of Arts, London 2002; High Art Lite: British Art in the 1990s, Verso, London 1999 and Gargantua: Manufactured Mass Culture, Verso, London 1996. On a senior fellowship from the Paul Mellon Foundation, he is currently researching a book about the relations between cultural and political populism.

Killing for Show has its origins in Stallabrass’ curation of the Brighton Photo Biennial in 2008, Memory of Fire: Images of War and the War of Images’, and has been over ten years in the making. He has published extensively in the area over this time, in forms ranging from reviews to catalogue essays, and has edited two books (both 2013) that bear on the subject: Documentary for the MIT/ Whitechapel Documents of Contemporary Art; and Memory of Fire, published by Photoworks, Brighton. He has also been teaching these subjects at undergraduate and postgraduate levels, including the supervision of PhDs.