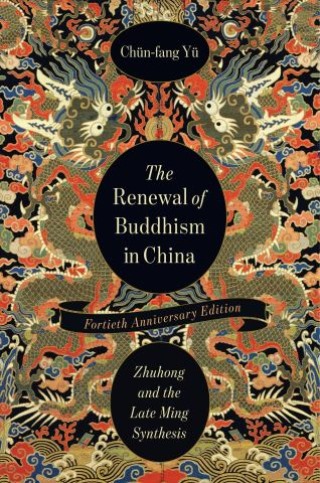 The Renewal of Buddhism in China

Zhuhong and the Late Ming Synthesis

First published in 1981, The Renewal of Buddhism in China broke new ground in the study of Chinese Buddhism. An interdisciplinary study of a Buddhist master and reformer in late Ming China, it challenged the conventional view that Buddhism had reached its height under the Tang dynasty (618–907) and steadily declined afterward.

Chün-fang Yü details how in sixteenth-century China, Buddhism entered a period of revitalization due in large part to a cohort of innovative monks who sought to transcend sectarian rivalries and doctrinal specialization. She examines the life, work, and teaching of one of the most important of these monks, Zhuhong (1535–1615), a charismatic teacher of lay Buddhists and a successful reformer of monastic Buddhism. Zhuhong’s contributions demonstrate that the late Ming was one of the most creative periods in Chinese intellectual and religious history. Weaving together diverse sources—scriptures, dynastic history, Buddhist chronicles, monks’ biographies, letters, ritual manuals, legal codes, and literature—Yü grounds Buddhism in the reality of Ming society, highlighting distinctive lay Buddhist practices to provide a vivid portrait of lived religion.

Since the book was published four decades ago, many have written on the diversity of Buddhist beliefs and practices in the centuries before and after Zhuhong’s time, yet The Renewal of Buddhism in China remains a crucial touchstone for all scholarship on post-Tang Buddhism. This fortieth anniversary edition features updated transliteration, a foreword by Daniel B. Stevenson, and an updated introduction by the author speaking to the ongoing relevance of this classic work.

Chün-fang Yü: Chün-fang Yü is Sheng Yen Professor Emerita of Chinese Buddhism in the Departments of Religion and East Asian Languages and Cultures at Columbia University. She is the author or editor of a number of books, including Kuan-yin, the Chinese Transformation of Avalokitesvara (Columbia, 2001), Passing the Light: The Incense Light Community and Buddhist Nuns in Contemporary Taiwan (2013), and Chinese Buddhism: A Thematic History (2020). She is the former editor of the Sheng Yen Series in Chinese Buddhist Studies at Columbia University Press.