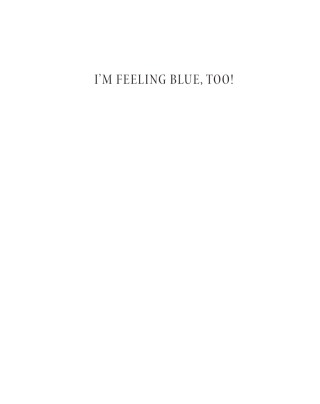 We all have days when we feel bored. We all have days when we feel blue. I'm Feeling Blue, Too! turns the "can't-do-nothin'" blues into an exciting exploration of color. Climb inside a spinning bubble, grab some sky from high above a trampoline, dive into the swirling ocean waves, stack a tower of dreams, and ride far into the night with a courageous knight. Get ready. Get set. Guess blue!

Marjorie Maddox: Marjorie Maddox is Professor of English and Creative Writing at Lock Haven University. She is the author of Local News from Someplace Else  (Wipf & Stock, 2013); Perpendicular As I  (1994 Sandstone Book Award); Weeknights at the Cathedral (2006); Transplant, Transport, Transubstantiation  (2004 Yellowglen Prize); When the Wood Clacks Out Your Name: Baseball Poems (2001 Redgreene Press Chapbook Winner); Body Parts (1999); Ecclesia  (1997); How to Fit God into a Poem (1993 Painted Bride Chapbook Winner); Nightrider to Edinburgh (1986 Amelia Chapbook Winner); and the forthcoming short story collection What She Was Saying, as well as over 450 poems, stories, and essays in journals and anthologies.

She is the co-editor, with Jerry Wemple, of Common Wealth: Contemporary Poets on Pennsylvania (2005) and two children's books--A Crossing of Zebras: Animal Packs in Poetry  (2008) and Rules of the Game: Baseball Poems (2009)--and two forthcoming--A Man Named Branch: The True Story of Baseball's Great Experimentand Inside Out: Poems on Writing Poems. Working Poet: 75 Writing Exercises.  Her memoir essay, "Going Exactly Where We Want to Go," is included in Fast Break to Line Break: Poets on the Art of Basketball, edited by Todd Davis.

Marjorie studied with A. R. Ammons, Robert Morgan, Phyllis Janowitz, and Ken McClane at Cornell, where she received her MFA in poetry in 1989. Maddox received an MA in English at the University of Louisville and a BA in Literature at Wheaton College. She lives with her husband and two children in Williamsport, PA, birthplace of Little League and home of the Little League World Series. She is the great grandniece of baseball legend Branch Rickey, the general manager of the Brooklyn Dodgers who helped break the color barrier by signing Jackie Robinson.