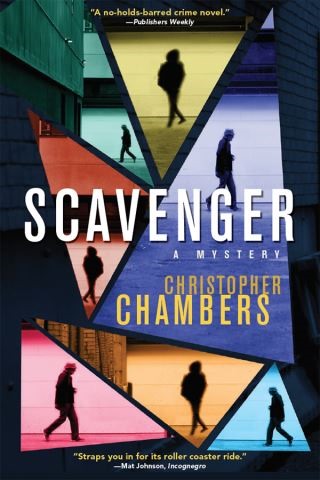 “Novels written from the perspective of homeless substance users don’t come along every day. When they do, it’s a good idea to pay attention, since they offer a window into the casual cruelty of our social economy, which much fiction eschews. Christopher Chambers’ new mystery Scavenger offers just such a window.” —Washington City Paper

“[SCAVENGER] is gritty, raw, and lays bare the dirty consequences of political decisions on the lowest rungs of the population. The character comes from darkness to fight through darkness to defeat more powerful darkness…. Chambers gives a great thriller-mystery story and dares to embrace different ways of telling it.” —Jay Wilburn, author, The Dead Song Legend

“In Washington, D.C., a Black man living in a homeless camp near the Smithsonian is framed for the murder of two of his closest friends. He faces life in prison. But when he meets an ex-Homeland Security Secretary, things start turning around. Sort of. He can avoid the life sentence—if he helps the former government official find a missing woman using the network of the streets and the underground world of undocumented immigrants.” —Betches

"Chambers is a talented storyteller and is slick and savage in his delivery...Now he delivers another scary world, scarier still because of the many truths that will resonate long after you read the final word." —Dolores Barclay, former Arts Editor, The Associated Press

“Chris Chambers’s Scavenger is a clever mystery told with wry wit and a vivid second-person style that straps you in for its roller coaster ride. You open this book and that voice starts speaking to you and you want to hear what it has to say. Simply put: this is a damn a good read.” —Mat Johnson, author of Incognegro, Pym and Loving Day

“Chris Chambers has created a wholly original character that exists in a world at once familiar but startlingly brutal.”  —S. A. Cosby author, Blacktop Wasteland

“SCAVENGER is as hard and unflinching as noir gets—an immersive portrait of life on the streets in Trump’s America. Yet, in the person of Dickie Cornish, Chambers has delivered a voice of idiomatic, hard-won radiance—and a truth-seeker equal to all the lies and all that lies ahead.” —Louis Bayard, author, Roosevelt's Beast and Mr. Timothy

“Chambers comes out of the box swinging hard in this fast-moving, down-and-dirty crime novel that kicks up the tarp on the sleazy, duplicitous, double-dealing underbelly of our nation’s capital. Into this shadowy knot of deceit walks unconventional detective, Dickie Cornish, a homeless, down on his luck survivor for whom the stakes couldn’t be higher, or the risks greater. Two thumbs up for Chambers!” —Tracy Clark, author of Borrowed Time, winner of the G.P. Putnam’s Sons Sue Grafton Memorial Award

“Scavenger is a clever mystery told with wry wit and a vivid second-person style that straps you in for its roller coaster ride Simply put: this is a damn good read.” —Mat Johnson, author, Incognegro, Pym, and Loving Day

“In SCAVENGER, Christopher Chambers shows us a Washington D.C. we've never seen through the eyes of a sleuth unlike any we've ever met. A harrowing noir odyssey through contemporary America." —Vince Keenan, Editor, Noir City magazine; co-author, Design for Dying and Script for Scandal

Christopher Chambers: Christopher Chambers is a professor of media studies, as well as a novelist published through Random House, MacMillan and Three Rooms Press. His novels include A Prayer for Deliverance and Sympathy for the Devil, the graphic anthology (with Gary Phillips) The Darker Mask, and PEN/Malamud-nominated story, “Leviathan.” His short stories have been included in the Anthony award-winning anthology The Obama Inheritance, The Faking of the President and Black Pulp 2. Professor Chambers is a regular commentator/contributor on media and culture issues on SiriusXM Radio, ABC News, and HuffPost. He resides in Washington, D.C. with his family and German Shepherd, Max.