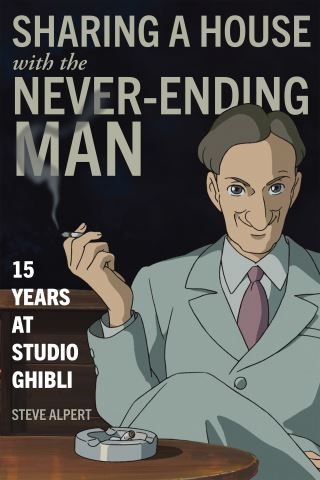 Sharing a House with the Never-Ending Man

A highly entertaining memoir describing what it was like to work for Japan’s premiere animation studio, Studio Ghibli, and its reigning genius Hayao Miyazaki. A behind-the-scenes look at what it’s like for a gaijin (foreigner) to work in a thoroughly Japanese organization run by four of the most famous and culturally influential people in modern Japan.

Steve Alpert studied Japanese Literature at Columbia University under Donald Keene and Edward Seidensticker. He speaks Japanese and Chinese fluently, having lived in Tokyo, Kyoto, and Taipei for a combined total of over 35 years. Alpert worked in Tokyo as a vice president at a major bank, as president of an American TV animation company, and as head of international sales at Japan's premier animation studio, Studio Ghibli, cofounded by Hayao Miyazaki and Isao Takahata . He has translated more than a dozen Japanese films and several short works of Japanese fiction. His book in Japanese about his experiences working at Studio Ghibli was published in 2015 by Iwanami Shoten. He lives near New Haven, CT.