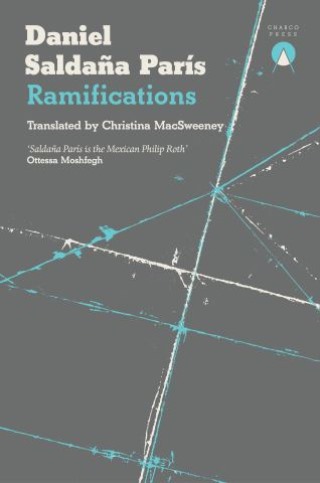 The memories we return to most frequently are the most inaccurate, the least faithful to reality...

This is the tragic realisation made by the narrator of _Ramifications _as he tries to make sense of the defining event of his childhood: the disappearance of his mother to join the Zapatista uprising that shook Mexico in 1994. Left behind with an emotionally distant father who is singularly unqualified to raise him, and an older sister who only wants to get on with being a teenager, he takes refuge in strange rituals that isolate him from his peers: favouring the left-hand side of his body, trying to tear leaves into perfect halves, obsessively shaping origami figures. Now, two decades older and withdrawn from the world, he folds and unfolds these memories, searching the creases for the truth of what happened to his mother, unaware that he is on the verge of a discovery that will destroy everything he believed he knew about his family.Award-winning Mexican author Daniel Saldaña París masterfully evokes a child’s attempts to interpret events beyond his understanding. Less a Bildungs-roman than a tale of arrested development, this story of a boy growing up in the aptly-named Educación neighbourhood of Mexico City is a rich and moving portrait of a life thwarted by machismo and secrecy.

Daniel Saldaña París is a poet, essayist and novelist born in Mexico City in 1984. He is considered to be one of the most important figures in contemporary Mexican literature. His debut novel Among Strange Victims (En medio de extrañas víctimas, 2013) was a finalist for the Best Translated Book Award and Ramifications (El nervio principal, 2018), his second novel, has brought him even more praise and admiration in Mexico and abroad. He has two poetry collections and his work has been included in several anthologies, including México20: New Voices, Old Traditions (Pushkin Press, 2015). In 2017, he was chosen as one of the Hay Festival’s Bogotá39, a selection of the best Latin American writers under forty. He has been a writer in residence at the MacDowell Colony, Omi International Center for the Arts, MALBA and Banff Center.